Hello my hungry hombres! I thought it was time I did a tutorial for my tantalizing tuna casserole! I guess you could say this is a ‘tunatorial’! HAHAHAHA! Get it? Tunatorial? Anybody? Hello? See, I put tuna and tutorial together and–ahh forget it! Anyway, I wanted to share with you my twist on tuna casserole. Not only is it tasty, it’s fairly easy to make and won’t turn your bank account into a dark, hopeless void like other snobby foods do. (Yes, I’m talking to you, braised ibis liver!)

This is yet another one of those recipes that have evolved over time into something that will turn the average rational human into a greedy flavor junkie. Seriously, I’m not even that big a fan of casseroles but this stuff makes me want to take the whole pan and lock myself in a closet and whisper “my precious” to it between mouthfuls of squishy tuna goodness.

Okay, so before things get anymore awkward, let’s get started! First, we’ll assemble the musicians – er, I mean the ingredients. Here’s what you need: 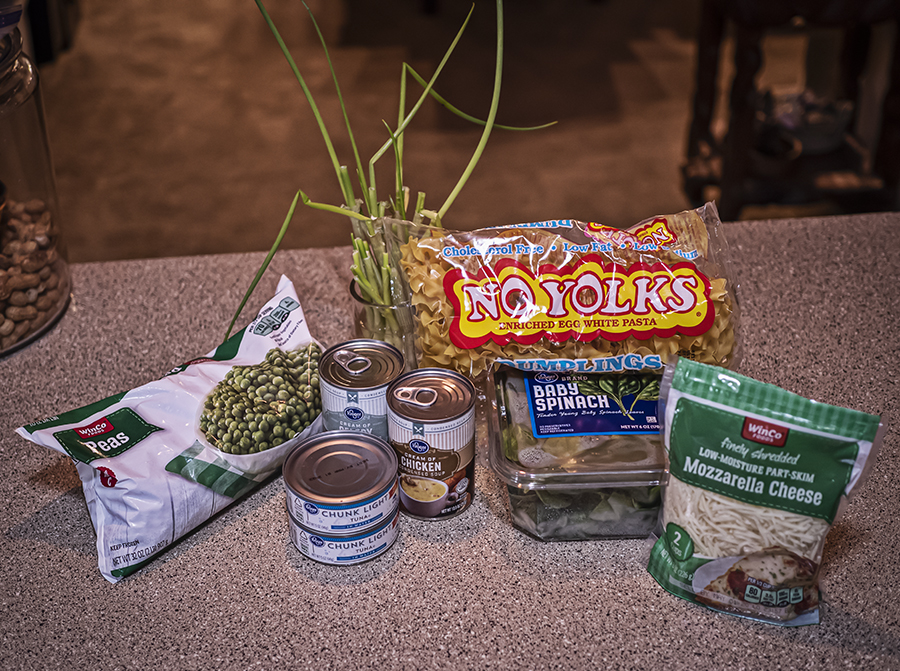 Wait a minute. I think I forgot something! 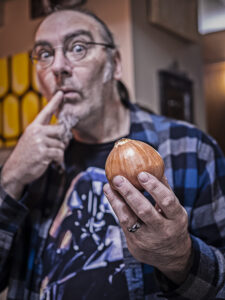 *Also we decided to add another can of tuna because the universe seemed out of balance.

There, that’s better! Also, we’re going to add some spices. You’ll get no measurements from me here. You’re just gonna have to wing it and hope for the best! 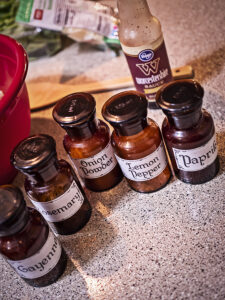 Other things you’ll need (not pictured): A medium saucepan, wooden spoon, colander or pan strainer, large mixing bowl, chef or other large kitchen knife (we use a Santoku), cutting board, 9” X 14” X 2” baking pan, oven mitts, and a fork.

You’ll also want to set your oven racks up. Put one in the middle and one closer to the top leaving enough space to fit your baking pan comfortably in. You want your pans to feel comfortable, don’t you?

Ok, we got all our parts, let’s unite them into an assemblage of congenial flavors! First, open your bag o’ noodles and dump them into the medium size saucepan. Add just enough water to level off with the top of the noodles. You don’t need to completely drown them. You’re not a monster, after all. Put them on a burner and turn the heat all the way up! 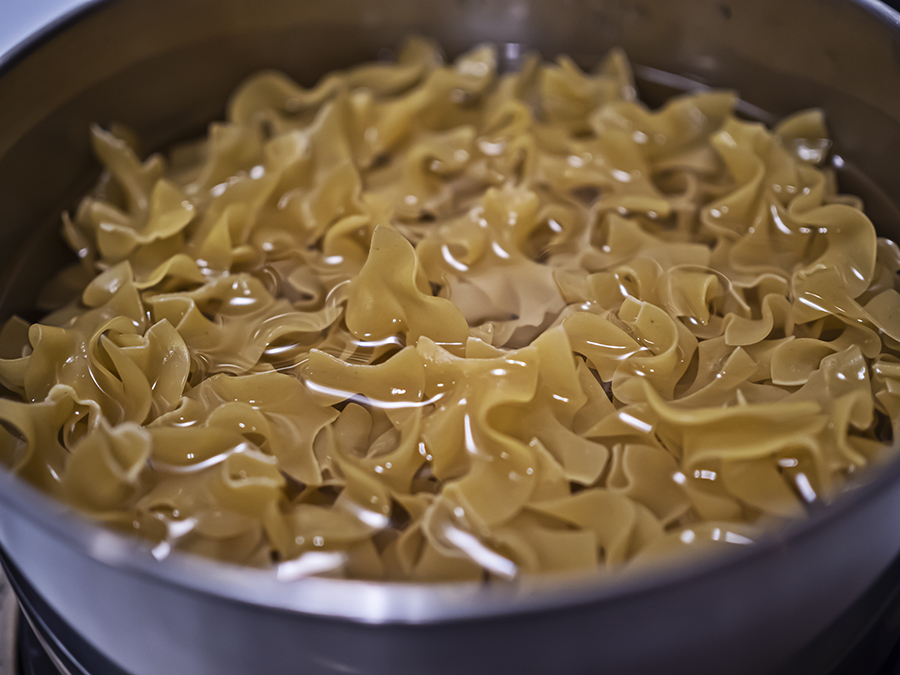 Now, some folks’ll tell you to add salt to help the water boil. In this case, you don’t need to because you’ll be chopping vegetables while your water heats up so there’s no rush. (It’s also a healthier option.) You will, however, want to keep a close eye on that pan because egg noodles tend to boil over very easily. I almost always get noodle foam on my stove. You’d think I’d be used to it by now but it never fails to emote a stream of vocalized obscenities, and that’s ok according to my therapist. At least I’ve stopped throwing pans of scalding noodles across the parking lot. What? Like you’ve never done it! Too bad about your neighbor’s SUV, though… 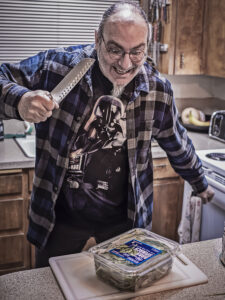 Umm, you’ll probably want to take them out of the package first. Have a large mixing bowl at the ready and in no particular order hack and slash your way through the spinach. You don’t need to mince it up too small because it’ll cook down. Once it looks properly shredded toss it into your mixing bowl. Keep in mind this only applies to those without food processors. If you have one of those it’s a lot faster so go ahead and use it. (I don’t care, I ain’t gotta wash it.) We don’t have one so we do it the old school way with a very sharp and bloodthirsty knife. Whichever method you choose the end result should look about like this:

Next, dice up the entire onion and toss it into the bowl. Again I recommend chopping it into smaller bits not only to release more oniony flavor but also to minimize the texture because as I’ve mentioned before; I love onion flavor but I hate onions. I have to trick myself into eating vegetables, so I live by this rule with most things veggie. It also helps if you have finicky guests who feel as I do about it. Like me, perhaps because I’m assuming you’re inviting me over to try your delicious tuna casserole. What? Oh. You’re not inviting me over. I see. This is the thanks I get. Ok, well you just remember that the next time you need your bathtub anodized. Then we’ll see who’s laughing.

As long as you have the cutting board out you might as well chop up your green onions, but don’t mix them in. They are for later. Put them into a separate container and set them over by the cheese to keep it company while it waits for its part in this little flavor play.

You’re keeping an eye on those noodles, right? I hope so because I’ll bet right about now they’re about to boil over! I’ve heard of a lot of different remedies to prevent this from happening. The three most popular are putting a little oil in the water (also helps prevent the pasta from sticking to itself and the pan), putting a wooden spoon over the top, and adding salt to the water (this is supposed to help the water boil faster somehow?). None of these have worked for me so I just rely on the old try-to-catch-it-before-it-boils-over-and-spills-foam-all-over-the…..ah dammit!

If you’re wondering why pasta boils over so easily, here’s some sciency info about it.

Once the noodles start looking like they are going to boil over, turn the heat way down. Take your wooden spoon and give a good stir. You may have to take the pan off the burner for a second or two until everybody calms down and it’s deemed safe to resume simmering.

No Yolks tend to get done rather quickly, which is one of the nice aspects. I can usually count on them being done by the time I’m finished chopping veggies. They should be pale, but not too pale, with a little yellow left. If they’re almost white they are probably overdone and mushy. It’s best to check them by snagging one out of the water with a fork and give it a nibble. It should be soft, but still retain enough resilience to remain just a touch chewy. If they disintegrate immediately then you’ve failed miserably and will now be required to hang your head in shame for a period of seven days.

Just kidding! They’re still ok to use. It’s just a tuna casserole. It’s not like you’re going to be serving it to the Queen of Quuboria. They’ll stiffen up a bit in the baking process. It’s all going to be fine, you’ll see.

Okay, so once you’ve determined that the pasta is al dente (or to your preferred texture of choice) turn off the burner, and put a colander in the sink. If you don’t have one, a pan strainer will do. I prefer a colander because it’s easier. I’m hungry and the last thing I want to do is stand around in my kitchen with a drippy pan of hot pasta. It’s also safer than a strainer because you’re less likely to get a face full of scalding noodle steam. So into the colander it goes! 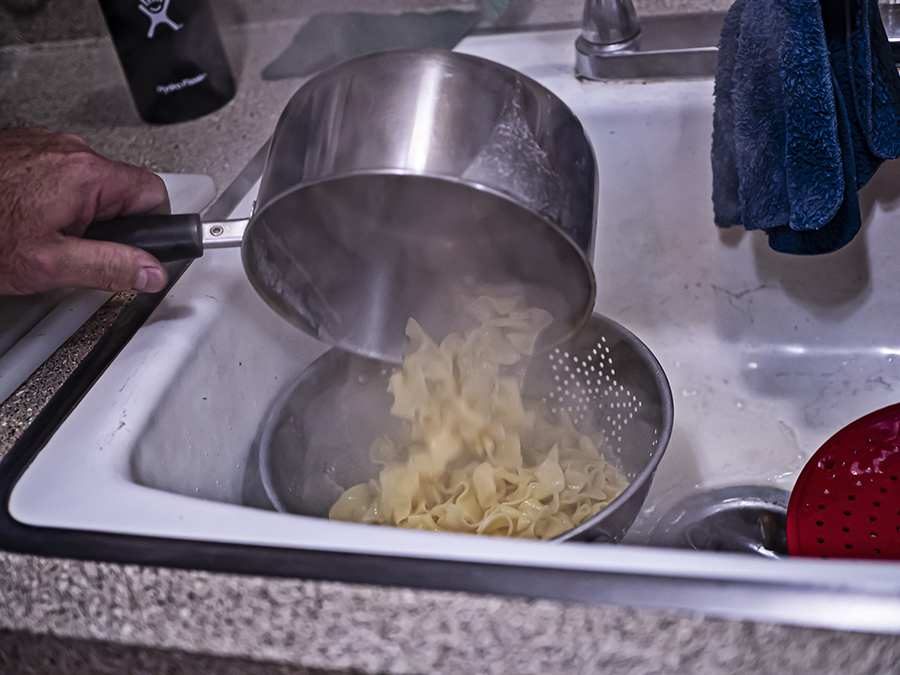 When it seems properly drained, dump the whole lot into the mixing bowl.

You may now turn on your oven and set it to bake at about 400 degrees. Add the three cans of tuna, peas, the two cans of soup, a few dashes of Worcestershire sauce into the mixing bowl, and spice to taste. If you haven’t tried this version (or similar version) I would suggest going easy with the hot stuff! Also go real easy with the rosemary. It’s rather overwhelming, so all you want is a healthy pinch. We’re still not doing anything with the cheese or green onions yet! Leave them alone, they’re not bothering anyone. 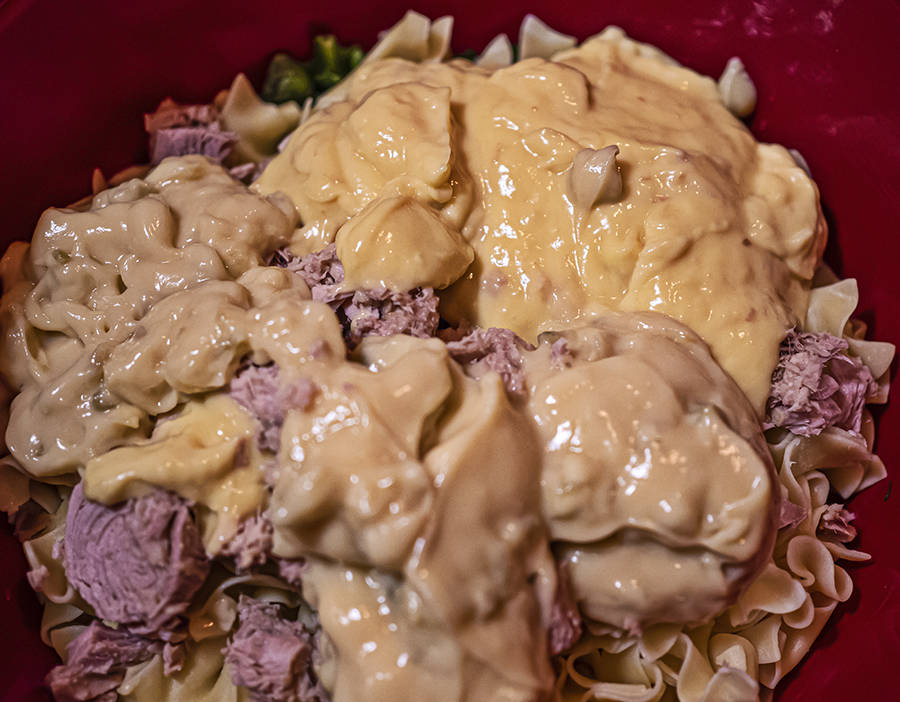 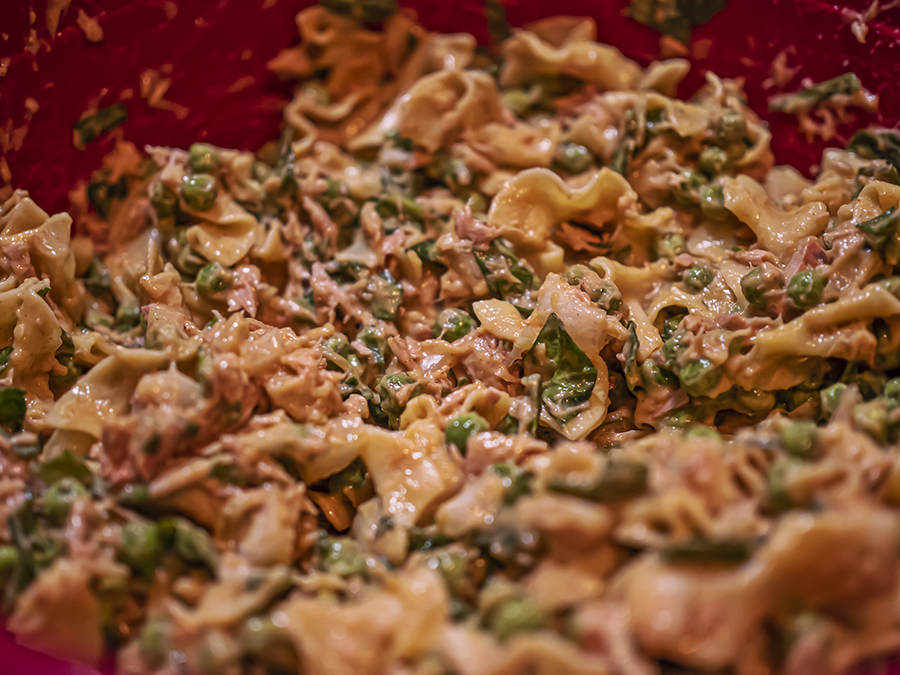 Once you have a consistently mixed gooey mass, dump it all into your baking pan and flatten it out evenly. When you have a nice, even field of gooey goop you are now ready for the last components in our glorious concoction: the cheese and green onions. Yes, exactly in that order. Empty the whole bag of cheese and spread it evenly, covering the entire top. Then take your green onions and sprinkle them liberally over the whole thing. Use them all up. You won’t be sorry.

By now some of you may be wondering where the cracker crumbs or other crunchy substance is. We don’t do that here. We’re different. You can do that with your tuna casserole if you want to, but the whole point is to use cheese in place of the crumbs. I suppose it couldn’t hurt to try both, and perhaps someday I will. For now we’re staying with the tried and true formulae.

Time to bake! Your heat should be ready by now, so into la oven it (middle rack) goes! 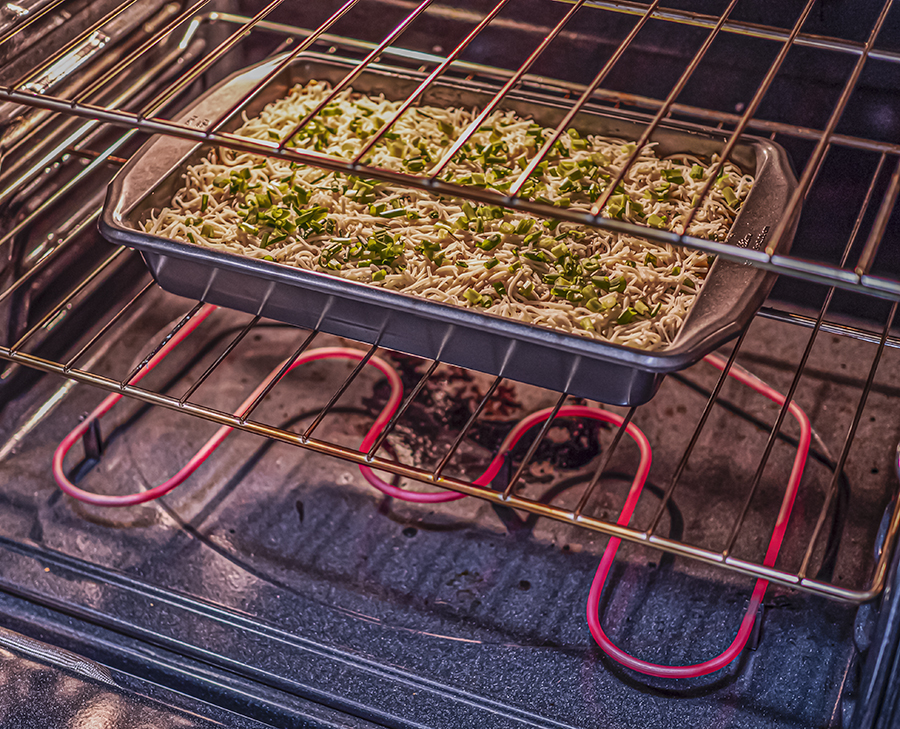 Set a timer for 15 minutes, and when it goes off check on it. The cheese should be bubbly, but still pale. It may take a few more minutes. Check back in no more than five minute increments. Once it looks properly bubbly put your oven on broil and transfer your pan o’ bubbly noodle goo to the top rack. Don’t forget to use your oven mitts!

Keep a close eye on the progress. You are trying to give it a nice, even browning without it turning into a brittle crust of carbon. Once it looks good to your liking get it the hell outta there lickity-split and put it in a place that won’t start a fire or melt a counter top.

THIS IS DEFINITELY REAL TUNA CASSEROLE

Turn off your oven. It’s over. You’ve won! You should now have a fully baked casserole that looks a bit like this: 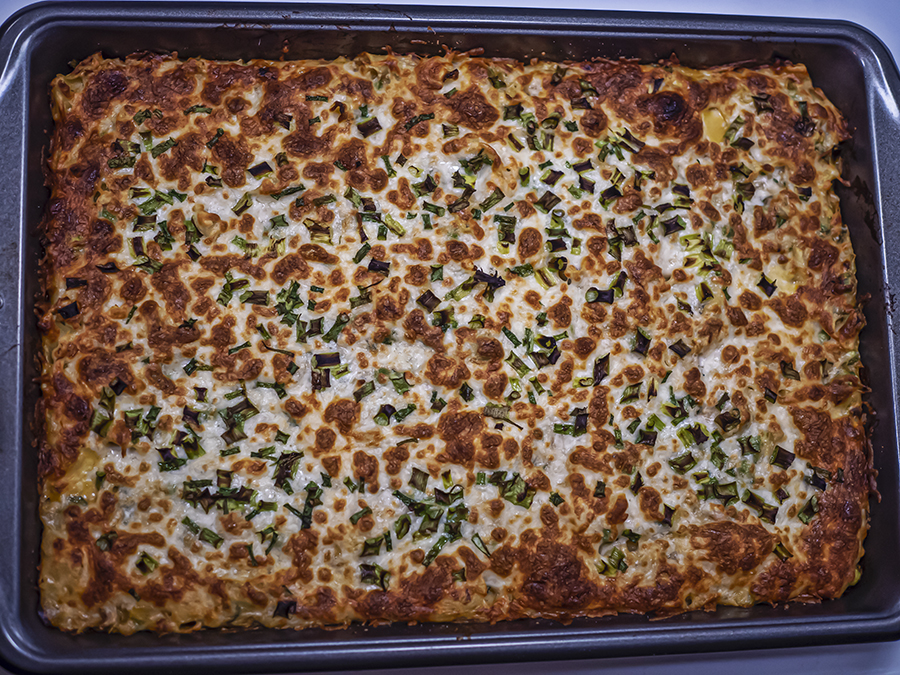 Let it cool for five minutes, then serve it up! (I like to top it off with some cracked pepper and pink salt!) 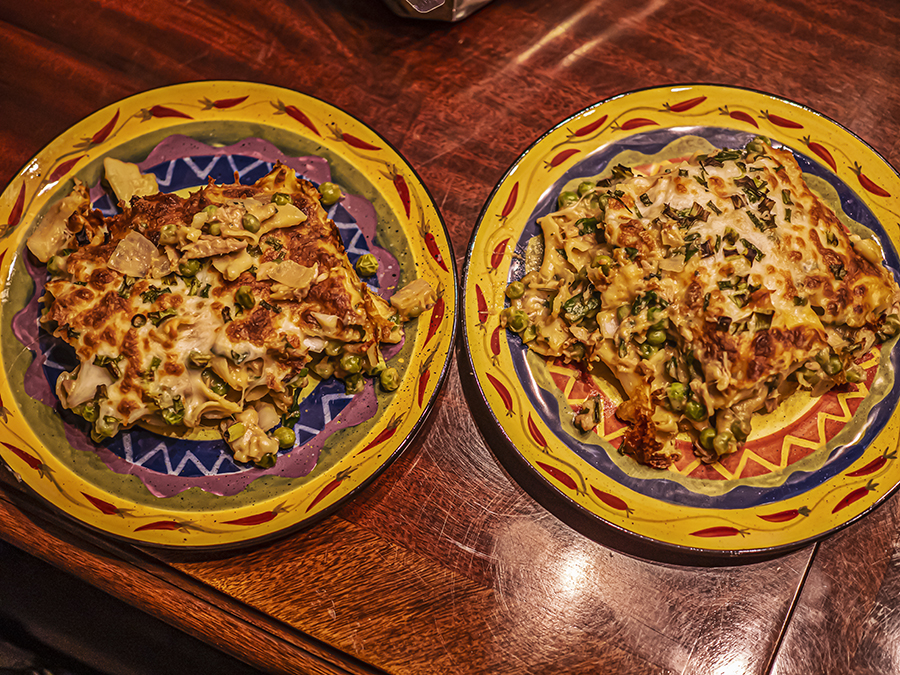 I love our colorful chili-pepper plates but I swear we are never, ever using them for food photos ever again, ever. –Variable

Hopefully you enjoy it as much as we do! Thanks for checking out this article and if you dig it please go to our Facebook and Instagram pages and give us a like! Happy dining!

Be the first to comment on "Tuna Casserole with CHEESE" 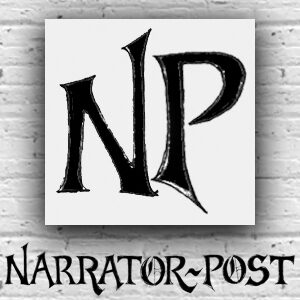 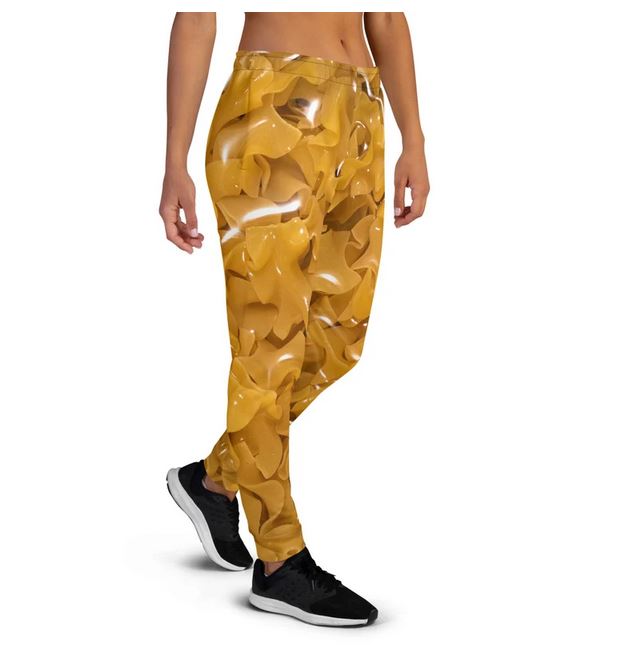